Encounter with the dolphins

Our encounter with the Dolphins

It was a nice Spring day, with a calm see like we had not seen for a while. We decided to go to the Frioul to do some spearfishing. We were almost at the Château d'If, when several flippers caught our attention. It is definitely a surprising place! For a minute, we remembered the couple of whales that we saw there a few years back. This time, they are white and blue dolphins. This species is more common, but still, you have to be lucky to see them so close to the coast.

We also had already encountered two couples of dolphins with their babies, and that day only the two males came by. This time, there was no young dolphins and the group was larger, about a dozen. We kept a safety distance and slowed down (their speed is about 3 knots) in order to sail parallel to their group. We did not have to wait for too long before seing the first curious ones approaching. They came to swim an play at the stem of the boat for long minutes. What is funny is the boat we were in was a Boston 13, the same boat used in the tv series « Flipper »! 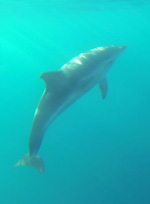 White and Blue dolphins are the most common species in the Mediterranean sea (about 250.000 individuals). They are 2 meters long, 100 kilos, and can live up to 40 years old. We can recognize them with their curved body, their pointed beak and their particular colors (a dark grey back, grey white and blue sides, and dark lines near the eyes. Their belly is white).

They are very sociable, curious, playful, and they move in group of 4 to 40 individuals. They can dive to a depth of 200 meters. They feed on fishes, octopus, crustaceans that they chase mostly at night in groups of 2 or 3, a few hundreds meters away from each other to cover a large area. Then they gather at dawn. During the day they hunt differently: they surround the shoals of fishes and make them go to the surface before rushing forward.

They mate in summer, and the baby is born on the next summer (about 90 cm long and 8 kg). When the dolphin gives birth, the caudal flipper of the baby comes first to protect the lungs. Once out, another dolphin will quickly take the small dolphin up to the surface to make it take its first breath. Then the baby dolphin will stay close to its mother for several weeks, before being progressively autonomous.